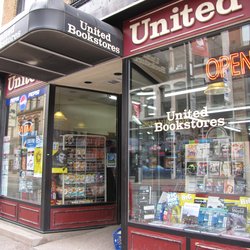 Here is my two bits.

I love used bookstores. A lot of them have closed here in Halifax. I miss them greatly.

I have always understood that a sale in a used bookstore does nothing for my pocketbook. But I also know that I have discovered writers in used bookstores and have gone on to hunt up their books in other bookstores – just because I wasn’t willing to sit around and wait to see if the rest of a certain author’s line-up showed up at one of the used bookstores that I frequent.

So – in the long of it I would say that used bookstores CAN sometimes benefit an author. I have quite a few friends whom I realize will NEVER buy one of my books – because they are too broke, or they don’t like booga-booga horror or they just aren’t big on reading. I don’t figure I should “unfriend” them just because they aren’t buying my books. So I stay friendly with used bookstores for that very same reason.

The fact is, I am NOT a business person. I would be if I were smarter at this gig of mine – but I am better at making shit up than I am at making a profit at it. I figure that doesn’t make me a lesser writer – just a less than rich one.

Anyways – I ought to be writing right now.

I need to make a little bit more money so that I can go and spend it at my local used bookstore.