“Many years later, in front of the firing squad, Colonel Aureliano Buendia would remember that distant afternoon his father took him to see ice.” –  ONE HUNDRED YEARS OF SOLITUDE by Gabriel Garcia Marquez

Back around this time of the year in 2012 I wrote a blog entry about the importance of a good first line.

Just this morning while scrolling through my Twitter feed I came across a link that lead me to a DeMilked photo-article entitled TWENTY FIVE OF THE MOST BEAUTIFUL DOORS AROUND THE WORLD.

That owl-door at the top of the page is one of those twenty-five magical doors.

“That’s beautiful,” I thought to myself. “I ought to put that up on my Facebook page.”

Only while I was getting set to put it up on my Facebook page I thought – “Wait a minute. I ought to write a blog entry about how your first sentence is like a doorway to your novel” – which was actually what this blog entry was going to be titled.

Only that got me to thinking that ACTUALLY the cover of the novel is your front door.

Hands up, out there. How many of you have ever seen the movie FORREST GUMP?

Now that was a fellow who never met a door that he did not try and enter.

That’s what a writer needs to do. He needs to step out into the world and begin opening doors – and if one door leads to another – well, he had better be prepared to open that door as well.

So don’t be afraid to open that very next door that you come to. Keep your eyes wide open and explore the possibilities.

A blank page is an open doorway.

There is no telling WHERE it will lead you to.

If you need a little bit more inspiration why don’t you take a look at the deMilked website where all of these wonderful doors came from.

PS: Over the last week I released THREE e-books – which sounds pretty impressive except when you stop to consider the fact that I was working on BIG HAIRY DEAL for over six to eight months, and that the three stories in BIGFOOT TRACKS were written sometime ago, and that FIGHTING WORDS was written and released on KOBO several years ago.

I’ve already told you about the first two books in my last two blog entries but let me tell you a little bit about the third book which I released in Kindle format thanks to Kindle’s new KID BOOK CREATOR. 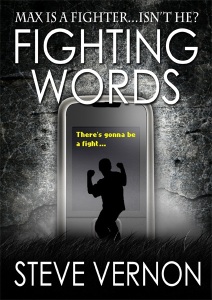 I’m afraid I have done VERY little promotion for this book beyond just sticking it up out there and keeping my fingers crossed. I’ve got a lot more promotion lined up for the two Bigfoot books. But this is a very Nova Scotia kind of story that I first thought about writing when I read about a “fight club” that had been set up in rural Nova Scotia using high school kids as meat puppet moneymakers.