David Bain is a toe-stubbing son of a gun…

Let me tell you all about David Bain’s latest book – Riders Where There Are No Roads.

This book falls under that uniquely creepy and fun category of weird western.

Now, I know some of you folks out there might not have heard that term used before, so I went some great deal of effort to look up the definition for you.

Well, I actually just took a look in Google – but as my Uncle Bob told me a long time ago that whatever you do in this lifetime you ought to be certain that you let people know that you did it with a GREAT deal of effort.

As in – I carried my empty beer glass to the kitchen sink and sort of glanced in the direction of the empty dishwasher which needed filling – with a GREAT deal of effort.

You get the idea.

So let’s break this term down into bite-sized chunks.

According to Dictionary.com – which is how folks spell Webster’s these days – the word WEIRD is an adjective that means “fantastic, bizarre, involving or suggesting the supernatural” or if you make a habit of wearing a kilt the word is a noun that means “fate or destiny”. The word historians believe the word WEIRD originated in the pre-900 Middle English term “wyrd”.

You know – like in those three wyrd sisters who double-double-talked old Macbeth into making some REALLY bad decisions.

So that’s a pretty good start, I figure.

Then we come to the second part of the term – namely, the word WESTERN.

Well, according to Dictionary.com the word western – especially when it is spelled with a capital “W”, as in Western – is a noun used to connote a story, movie, or radio or television play about the U.S. West of the 19th century.

Connote is an awfully good word, isn’t it?

I highly recommend you using that word “connote” any chance you get – especially when you are trying to convince people that you have gone to a “great deal of effort” – as in, “That certainly connotes the great deal of effort that I went to eating that western sandwich that was accidentally setting there on your dinner plate.”

See, right off the bat people hear you use that word “connote” and they start thinking that your use of that word connote “connotes” that you are really a little smarter than you actually might look.

Are you following me so far?

I am beginning to grow on you.

Kind of the same way that creeping fungus or glottal crotch rot or tabasco-stained moldy boxer shorts grow on you.

Now where was I?

Oh yes – when you put those two words together you come up with something that is a bit of a mutation. It is a little like chocolate pizza or coffee-flavored beer or maybe a hammock that can cuddle.

When you put those two words together you come up with what we literati like to refer to as a “cross genre”.

Now that doesn’t mean a genre that has got out of its cuddling-hammock without the benefit of a cup of coffee-flavored beer or a slice of chocolate pizza.

Basically, the word “cross genre” is just a long-winded way of saying “fun”.

In the weird western novel Riders Where There Are No Roads David Bain combines two very different sorts of characters as he deals with the outlaw-turned-sheriff crack shot Gentleman Jim Brodie and the snake-oil salesman Dr. Darius Darke. Then you throw in some demonic cowboys, a pick-up truck that thinks it used to be a horse – or maybe it is a horse that used to be a pick-up truck that is dreaming that is a horse, a living and breathing dragon and a mystical bad-ass biker for starters and you know that you are in for some mind-blowing storytelling.

Dave asked me if I would write a blurb for this book – but I cannot in good conscience write that blurb because I am pretty certain that Dave was drunk when he wrote this book. In fact, I think I might have been drunk when I read it because I laughed and I grinned and I giggled and I snorted Dr. Pepper out of my nostrils at every chapter break, making so much noise that my wife came running upstairs to see if I was either possessed by Pazuzu or else having an epileptic seizure and as a result of her run she stubbed her toe as she was coming around the outer door frame of my writing office door.

On top of which I leaped up to run to the rescue of my wife – doing my best to make it look as if I was going to a great deal of effort at the time – while simultaneously praying that she did not haul off and hit me – and I likewise stubbed my own left toe on the inner door frame of my writing office.

So I cannot tell you that David Bain writes like a drunken man galloping down a ninety degree incline on a love-sick yodeling mule – because his book made my wife stub her toe – and she only has ten of them to spare.

I cannot tell you that Riders Where There Are No Roads is funnier than a pig eating pickles – because David Bain stubbed my own favorite left toe.

Yours in storytelling,
Steve Vernon 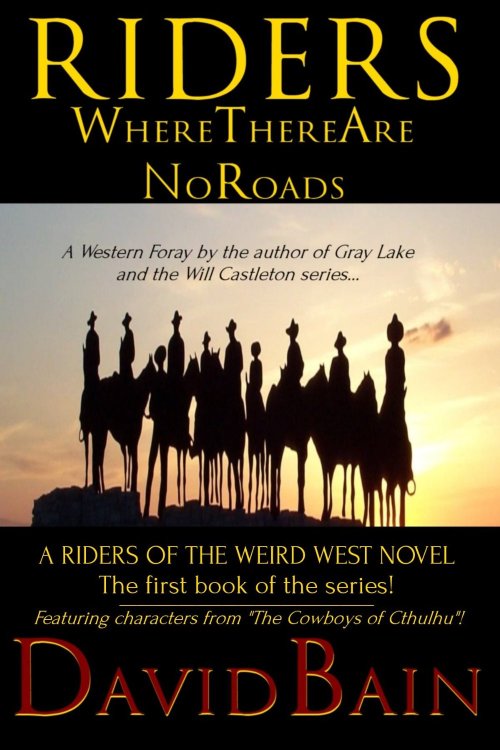 If you click this cover it will take you directly to the Kindle listing of David’s book which you can purchase RIGHT NOW for a mere 99 cents. It just doesn’t get any better than that.

This entry was posted in writing and tagged weird western. Bookmark the permalink.