Your book cover is the first and BEST impression that you will give to your reader – so you need to make certain that it is a GOOD one.

Do you want to save money on book covers?

THIS WILL SAVE YOU MONEY IN THE LONG RUN!

Don’t get your kid brother – who is a freaking whiz at staying in between the lines of his coloring book – do “whip you off a cover”.

Don’t sit down with a Youtube video and a photo of your cat, thinking to yourself that it’s EASY.
It ain’t easy.

Don’t do ANY of these things unless you are prepared to settle for a readership that consists of your wife, your dog, your mom and your other family members. 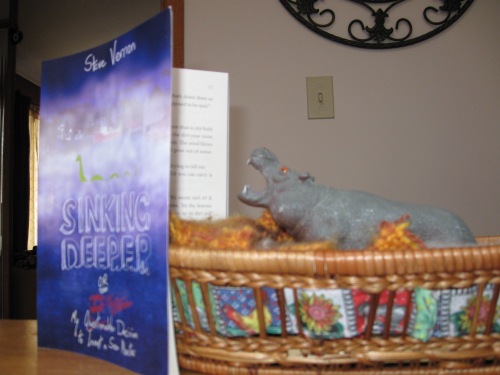 (hands up out there you folks who remember the great Canadian house hippo?)

Let me give you an illustration. It’s from one of my traditionally published books – but it IS available on Kobo and it DOES illustrate my theory perfectly.
Let me show you three photos of three separate cover designs my publisher Nimbus and I came up with for my YA novel SINKING DEEPER.

It might help if I told you a little bit about the novel.

This isn’t a commercial.

Sinking Deeper is the story of a young boy who decides with his grandfather to invent a sea monster. Now I know that sounds pretty prosaic – but when you throw in a jailbreak, an impromptu caber toss down a moonlit midnight street, a dory sinking, a couple of musical saw interludes along with some bagpipes and a team of gum-booted dragon dancers, a troop of Boy Scout ghosts, a treatise on stamp collecting and the attempted assassination of David Suzuki you have a better idea of the range we are dealing with in this novel. 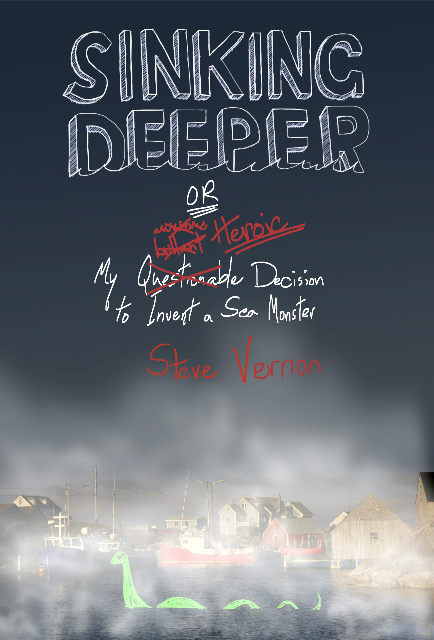 Then we worked on it a bit more and we finally came up with this version.

Which offers a little bit better balance of design and a happier shade of blue. I also really liked the way that the title seemed to actually “sinking” into the ocean.
That is the cover that we went to press with and there are still copies of this out there in bookstores across the country. However, this year Sinking Deeper made the shortlist for both the Hackmatack and the Silver Birch award – which meant we moved over 3000 copies in a single month – which isn’t too shabby for a regional press.

I told the publisher we might want to look at a cover that was a little more visual and that stood out on the bookshelf a little better.

So they came up with this version – from the talented Sydney Smith.

That’s what we have on our e-book version right now. It will hit the print run sometime this October – just in time for Halloween.

So remember – choosing a cover is VERY important. A cover is like a handshake with a prospective reader. He sees a good cover then he might actually reach into his wallet and pull out the money to BUY that book.

And that’s a good thing.

An awful lot goes into the making of an anthology.
Here are the demographics of TESSERACTS 17.

And – if you’d like to read MORE about Tesseracts 17…

Sorting out the demographics for Tesseracts 17 has been time consuming, and WordPress truly sucks when it comes to inserting a table in any format. It took me over four hours to generate the table below so if you’re curious about other breakdowns, you’ll have to pay me.

Each breakdown becomes more subjective. In this case, I had to guess at the gender of some people because names like Chris, or Terri, or initials don’t tell me if they’re male or female. I knew the names of many writers submitting so even if one had a male or female sounding name I knew where they actually belonged. The most accurate numbers are those of writers from different territories and provinces. We never received anything from Nunavut so it is the only part of Canada not represented. And while Newfoundland and Labrador prefer both names to be used to represent their…