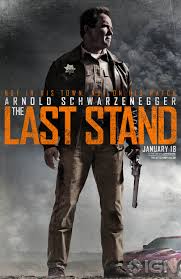 All right – so I don’t buy that many dvd’s these days.

For starters, I’ve got a small wall full of the suckers. Horror, western, war, comedy – I’ve probably got close to a thousand DVD’s.

But I’ve been wanting to see this movie ever since I saw it advertised at the theater back when I was watching THE EXPENDABLES 2.

I had wanted to catch this movie AT the theater – for the big screen effect – only it disappeared in about two weeks.

I found out why it disappeared after I bought it.

THE LAST STAND should have been a good movie – but they couldn’t remember what sort of a movie they had set out to create. The director, Kim-Jee-Woon, was way too interested in shooting way too many cool-looking car chase scenes – which would have worked if he had been filming The Fast and the Furious Part Sixty-Eight.

But it didn’t work as a Schwarzenegger movie.

Schwarzenegger is a force. He’s an unstoppable juggernaut of destruction. He’s meant to come at you like a freaking Tiger Tank. He’s not fast, he’s not fancy. He’ll stick a row of spears and swords into the dirt at his feet and wait for you to come at him and then cut you into about a billion tiny pieces.

That’s just how he rolls.

But they spent WAY too much time focusing on build-up.

When it came to delivery they fell short.

******
The choice of actors was one problem. Johnny Knoxville had a really cool Steve Buscemi vibe going on there in the beginning – but then they started to indulge his comical side and things got silly. He did that face-splat against the car window and it looked like an out-take of JACKASS PART SIXTEEN.

Same thing with Luis Guzman – who has a great mighty-ugly face for an action hero – but a voice that sounds like a castrated canary.

You see – there is nothing wrong with a few giggles in an action movie – but the mistake they made was over-indulging those comic actors and letting them get away with goofing around on camera. Keep the side characters playing it straight and save the occasional giggle lines for your hero.

Like I said – they pulled up short. They took an hour to get to the big shoot-out in town and then spent about five or maybe ten minutes shooting up the town before they decided to shoot this long freaking chase through a cornfield – which DID look all film school cool – but it didn’t have a freaking thing to do with the story.

A movie – or a story – needs to remember what arena it is being shot in.

You need to keep the main action in the main arena.

I wanted to see about an hour of the action going on in that shoot-out in the town. Not chasing through some cornfield that we never even saw before.

Same thing with the interaction of the townspeople. We never really did get any feel for the way that the Sheriff interacts with these townspeople. They were mostly hustled out of town in the beginning of the movie to go and see some all-too-convenient football game.

I would have related a lot more to the old folks who did show up for the gunfight if I had actually got to meet them a little bit more before the gunfight began.

The whole movie seemed rushed, in slow-motion. The filmmaker spent hours on super-cool car chase effects and getting the bad guy out of the lock-up – and then just rushed through the main scene – which should have Shwarzenegger and his buddies going all Magnificent Seven Wild Bunch on the cartel’s drug-peddling ass.

Schwarzenegger still has the chops, as far as I’m concerned. He’s got the perfect look to play that grizzled old juggernaut coming out for one last charge at the windmills – but I want to see him properly used – not just squeezed in around a half-assed car chase story.

I’m glad I saw the movie and I probably will watch it again sometime – but I’m likewise glad that I bought the cheap-and-dirty no-bells-no-whistles DVD of this flick. When I first saw the trailer I thought – HOLY COW, SCHWARZENEGGER IS REALLY BACK – but unfortunately this wasn’t the movie to do it with.

He may have just terminated his movie career.

yours in storytelling,
Steve Vernon